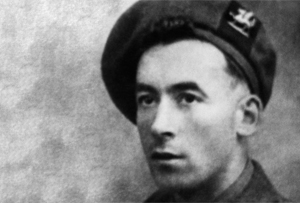 On 2nd April, 1945, a Company of the Monmouthshire Regiment crossed the Dortmund-Ems canal and was ordered to assault the ridge of the Teutoberger Wald, which dominates the surrounding country. This ridge is steep, thickly wooded and is ideal defensive country. It was, moreover, defended by a battalion of German officer cadets and their instructors, all of them picked men and fanatical Nazis.

Corporal Chapman was advancing with his section in single file along a narrow track, when the enemy suddenly opened fire with machine guns at short range, inflicting heavy casualties and causing some confusion. Corporal Chapman immediately ordered his section to take cover and, seizing the Bren gun, he advanced alone, firing the gun from his hip, and mowed down the enemy at point blank range, forcing them to retire in disorder.

At this point, however, his Company was ordered to withdraw but Corporal Chapman and his section were still left in their advanced position, as the order could not be got forward to them.

The enemy then began to close up to Corporal Chapman and his isolated section and, under cover of intense machine gun fire, they made determined charges with the bayonet. Corporal Chapman again rose with his Bren gun to meet the assaults and on each occasion halted their advance.

He had now nearly run out of ammunition. Shouting to his section for more bandoliers, he dropped into a fold in the ground and covered those bringing up the ammunition by lying on his back and firing the Bren gun over his shoulder. A party of Germans made every effort to eliminate him with grenades, but with reloaded magazine he closed with them and once again drove the enemy back with considerable casualties. During the withdrawal of his Company, the Company Commander had been severely wounded and left lying in the open a short distance from Corporal Chapman. Satisfied that his section was now secure, at any rate for the moment, he went out alone under withering fire and carried his Company Commander for 50 yards to comparative safety. On the way a sniper hit the officer again, wounding Corporal Chapman in the hip and, when he reached our lines, it was discovered that the officer had been killed.

In spite of his wound, Corporal Chapman refused to be evacuated and went back to his Company until the position was fully restored two hours later.

Throughout the action Corporal Chapman displayed outstanding gallantry and superb courage. Single-handed he repulsed the attacks of well-led, determined troops and gave his battalion time to reorganise on a vital piece of ground overlooking the only bridge across the canal. His magnificent bravery played a very large part in the capture of this vital ridge and in the successful development of subsequent operations.